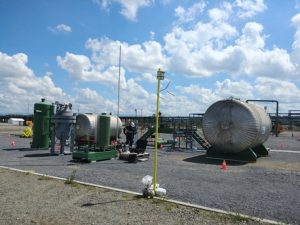 From June 4 to 8, 2018, Total EP R&D team organized a gas leak detection campaign on TADI facility in Lacq (64). To better understand the current operation of the installations, Justin Larouzée (CRC) participated as an observer in this campaign.

TADI being on a SEVESO 3 site, to be able to penetrate without being accompanied, it is necessary to justify a certain number of trainings which ensure in particular that the personnel present on zone know the types of alarms, the protocols of evacuation and implementation of individual gas masks. It was therefore necessary, in addition to the now widespread “safety inductions”, that Justin Larouzée follows a chemical risk training (empowerment of employees of the external companies level 1) then two PERL specific modules of e-learning.

The aim of the June campaign was to carry out a set of acoustic detection tests (localization, quantification) of controlled gas leaks. Several companies developing and/or marketing acoustic detection technologies have been invited to come and test their devices and associated algorithms in Lacq. The TADI team generated five days of nitrogen leakage (an inert and harmless gas) with varying source diameters and leak rates in the middle of the TADI facilities (see photo).

As part of the research project involving Total EP R&D and CRC, observing this campaign revealed in practice the functioning of the TADI facilities. This knowledge orients the design project of a remote command and control room (named BNP for Digital Booster PERL), which will be the subject of a next episode: to be continued!

Lacq oil and gas field, discovered in 1951 and operated since 1957, was the largest natural gas field in France. At the time, starting this field’s production represented a number of technical challenges (related to […]

CRC is pleased to present in 3 minutes and 30 seconds the latest progress of the TADI project (Total Anomaly Detection Initiative). This project is coordinated by the R & D group Total. It is […]

Professor Razvan Rughinis, Deputy Dean of the Faculty of Computer Science at Politehnica University (Bucharest), visited the researchers of MINES ParisTech at Sophia Antipolis this September. The opportunity for us to present the MINDS initiative, […]